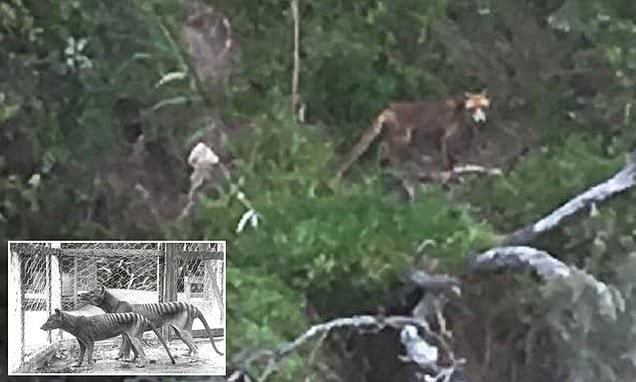 Is this proof the Tasmanian tiger is still alive? Farmer spots a mystery beast prowling through the bush – and it wasn’t scared of humans

A farmer has shared an image of what many believe to be a Tasmanian tiger near a town in Victoria.

Local resident Peter Groves spotted the creature while out walking near Clifton Springs on Friday, and managed to take a quick snap on his mobile phone.

Having posted the image to social media, a range of theories have been put forward, including suggestions that the creature is the long-lost Tasmanian tiger.

Farmer Peter Groves has shared an image of what many believe to be a Tasmanian tiger near Clifton Springs, Victoria

Mr Groves said the creature seemed unafraid and stood watching him for around five minutes.

‘It could just be a mangy fox, but it seems to be bigger than a fox and it’s not shy,’ he said.

‘There is a lot of bush and a lot of cover and I think it’s living quite comfortably there.’

Mr Groves was on a walking track between Beacon Point and Portarlington when he glimpsed the strange-looking animal down a gorge, the Geelong Advertiser reports.

The farmer described the animal as ‘funny looking’ with a ‘big long tail and stumpy ears’.

This was allegedly Mr Groves’ second sighting on the creature in a matter of weeks, and he said he wouldn’t write off the theory that it could be a Tasmanian tiger.

‘The picture I’ve got; even though it’s a bit fuzzy because it was taken on my mobile, it actually shows the features of the animal quite well,’ he said.

Tasmanian tigers had the general appearance of a medium-to-large sized dog with a stiff tail, abdominal pouch and dark stripes across its lower back.

They were the largest known carnivorous marsupials and are widely believed to have become extinct on mainland Australia in the 20th century.

The Tasmanian tiger or ‘thylacine’

The thylacine looked like a large, long dog with stripes and a long stiff tail

The last known thylacine died in Hobart Zoo in 1936