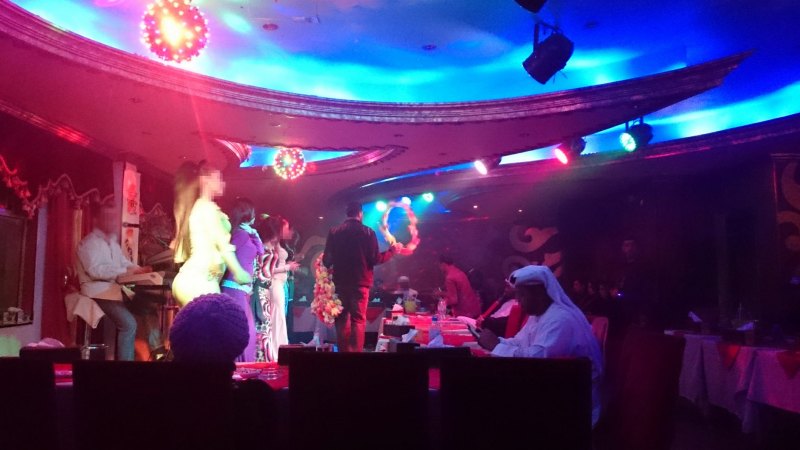 Dubai, United Arab Emirates: Imagine if you were told of well-paid work in a new country, far from your impoverished home. Once you arrived, you learned the only way to make the promised money was through prostitution. That’s what happened to 24-year-old Ethiopian Tsega*.

She sits on a bar stool in a dark basement bar in the old quarter of Dubai, dressed in a short skirt. Her hair is bleached.

“I started working in a supermarket, but life is so expensive here,” she says.

Tsega’s fate is shared with thousands of women in the United Arab Emirates. The country, and especially Dubai, one of the seven emirates, is known as a centre for prostitution and sex tourism in the Middle East. 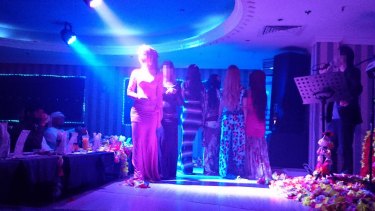 A rooftop bar at a hotel in the city of Ras al-Khaima. Women from Arab countries walked in circles or moved slowly on the stage. The customers were mainly Emiratis.Credit:Thessa Lageman

Some estimates have as many as 30,000 sex workers in Dubai alone.

It is one of the many in the emirate where prostitutes offer their services openly, even though prostitution is strictly forbidden in the UAE and sharia courts can impose flogging as punishment.

For Tsega, there wasn’t any money left from her monthly salary of 5000 Emirati dirhams ($1980) to send home to her sick mother. Now she earns about 20,000 dirhams a month.

“My family would never take the money if they knew. It’s a big secret,” she whispers and adds: “This work is really terrible. 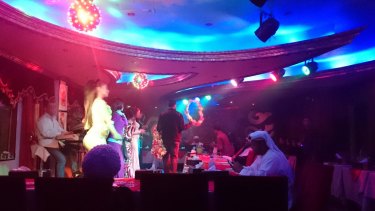 At a hotel bar in the city of Ras al-Khaima foreign women work as prostitutes and wait for customers. Credit:Thessa Lageman

“I think that in three months I will have earned enough and will go home.”

A Filipino rock band starts playing and a German tourist comes over and asks where she is from. 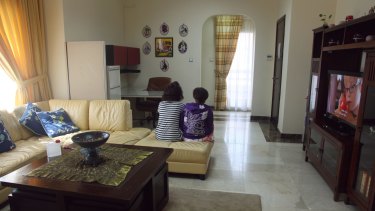 The living room in the Ewa’a shelter for women and children in Abu Dhabi. The women from Nigeria said they wanted to return home as soon as possible.Credit:Thessa Lageman

In a nightclub on the top floor of a hotel in the northern city of Ras al-Khaima, six women in nylon dresses slowly circle on a stage lit by coloured spotlights. Plastic flower garlands hang around their necks. The walls are draped with purple and red velvet. At the tables in front of the stage, men dressed in the traditional Emirati long white garb known as a dishdasha are drinking strong liquor and smoking water pipes. The keyboard player sings in Iraqi Arabic: “Don’t be so cruel, Syrian woman. This man is fed up with waiting. You are so stubborn. Bring your price down.”

Sex services in the country are also openly advertised on websites and social media. How many women do this work of their own free will and how many are coerced is unknown, says Sara Suhail, director of the Ewa’a shelters for trafficked women and children. Most of the victims had been offered a respectable job as a receptionist in a hotel or as a secretary in the UAE while still in their home countries, she explains from her office at a shelter in an Abu Dhabi suburb. “They are often lured to the country by a friend or family member and don’t suspect anything.” 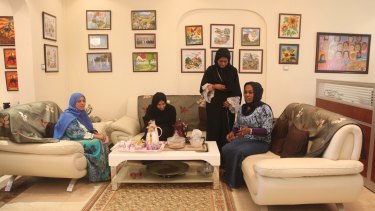 The shelter’s staff is made up of Emirati women. Maitha al-Mazrouei is second from left.Credit:Thessa Lageman

This was also the case with 19-year old Oksana, of Uzbekistan, who has long brown hair and is wearing a wide flower-print dress. She has been staying in the shelter for a few months now. Her best friend and her best friend’s mother, who had earlier moved to Abu Dhabi, persuaded her to come too, saying many well-paid jobs were available.

Soon after however, her friend’s mother told her to spend the night with an old Afghan man. 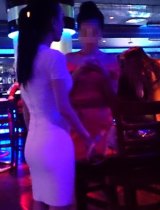 In a dark basement bar below a hotel in the old centre of Dubai, women from countries such as Vietnam, China, Ethiopia, and Uganda working as prostitutes wait for customers. Visitors were all men, mainly Westerners.Credit:Thessa Lageman

“Luckily, when I started crying, he didn’t touch me,” Oksana says in a soft voice. Instead he gave the mother 20,000 dirhams for the costs she had incurred in bringing the girl to the country. “But she didn’t release me and instead found another man interested in a virgin like me.” She managed to escape and the mother and daughter are now in prison.

Maitha al-Mazrouei, a shelter employee says helping victims of sexual abuse is something new in the Gulf region. “Most people don’t know that prostitutes are often forced. It’s still a big taboo.” She shows the bedrooms with the bunk beds, the large kitchen and the rooms where painting and other creative courses take place.

Two Nigerian women are knitting in the living room in front of the TV.

“We want to go home,” one of them whispers.

Dubai, Sharjah and Ras al-Khaima also have shelters, all opened by the National Committee to Combat Human Trafficking after a law was passed in 2006 criminalising human trafficking. So far, fewer than 250 women and children have stayed in the shelters.

The number of victims who have received shelter has decreased in the past few years, the director says, thanks to the state’s efforts in combating trafficking. The women are encouraged to take legal action, but in 2014, only 15 women took their cases to court.

However, Rothna Begum, researcher at Human Rights Watch, thinks that the number of victims who receive assistance, and the number of prosecutions are far lower than would conceivably be expected for a country known for its high rate of trafficking. “The UAE authorities would like to consider that the drop in cases is because of successful deterrence, but in fact, the success would be noted if there were more successful prosecutions”, she said.

An activist for migrants’ rights from one of the Persian Gulf countries, who asked not to be named after having received threats, says that “literally on a monthly basis” they receive reports about domestic workers being sold into sex slavery upon arrival in Dubai.

The government and recruitment agencies prefer not to upset the status quo, because they benefit from it economically, the activist says.

Most Viewed in World